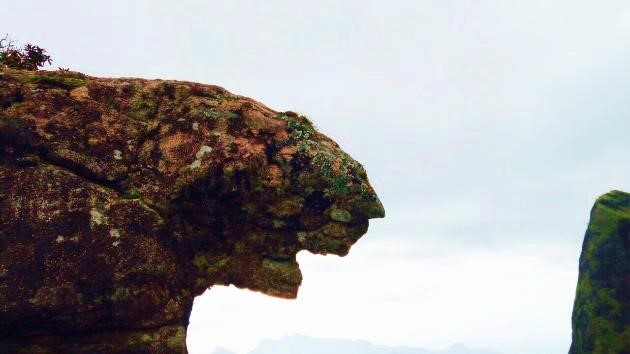 The following is a part of a travel experience. You may find other episode in the following links. Episode 1 Episode 3

This article is written by Soma Das, a chartered accountant based in Kolkata and a friend. She also owns the copyright of the photographs.

After we reached Munnar Pramic, The caretaker informed us that an off-roader would pick us up at 4.30 in the morning and take us to Kollukkumalai and that there is a trek path from Kollukkumalai to Meesapulimala. We decided to go for the road trip and skipped the trek to Meesapulimala. But I do intend to go back there once again and trek to Meesapulimala, approximately a 10 kms trek. No one should miss an opportunity to climb above the clouds and jump directly into it (albeit with a parachute - sorry for wrong hopes, there is no parachute dive allowed there).

We were ready dot at 4.30 am the next day (day 3) and Prince joined us. On our way I learned that our driver of the jeep had been driving on that rocky road for almost 8 years now. At one time Madhumita felt that all her organs got dismantled within and wondered how she would get normal again. With every inch per 5 seconds the jeep moved ahead, it jerked a centimetre per 1 second on its sides! We reached the point and saw the sun rising. But the season being rainy one, who could dare win over the clouds?

The sun was engulfed by the clouds and we decided to move on to another point to get a better view of the valley and the mountains. Such strong was the wind that I would get pushed, had I been few kgs less! Thanks to my weight that I was steady on my feet. While driving up the rocky road, our jeep driver had showed a 'lion rock' to Prince which exhilarated him to show us the point. So, after we passed the test of keeping ourselves steady on feet, we dangled to the lion rock point after making a quick visit to Kolukkamali tea factory established by the British. The guy who showed us around the old tea factory, made me participate in almost every process of tea making. No, it wasn't exciting at all. He (mildly) 'ordered' me - 'Madam, hold and slow give the leaves' (in his own broken English). And asked my friend to take my photo while I poured the dried up tea leaves on a sieving machine which segregated the smaller and larger leaves for the next process of crushing. Reluctantly, but sportingly, poured the leaves. I didn't smile for a nice snap.

The trek was for 10-15 mins from the tea factory to the lion rock point. I couldn't see the lion rock point but soon realised that I was almost on the edge of a mountain. But where was that lion rock? Someone was determined to find that out. Being a city girl, I decided to stop for a while and let Prince carry out the expedition. He was gone for 5 minutes now. Soon he called us to trek down a few meters on the edge of the mountain. Now that the path was already established by Prince, I convincingly started to trek down those few meters. I concentrated only on the trespassed trail lest I get scared trekking on the edge of the mountain. At the end of the trail I found the lion rock roaring right on my face. That's nature's creation.

I turned back and was awestruck at the greenness of the valley and kilometres away someone played music loud enough for us to hit our eardrums, but we couldn't identify the song. The music reverberated the valley and made it look more beautiful. Meanwhile, Madhumita trekked down after she saw that both of us were alive and lively. She trekked barefooted to balance her body but destiny leeched her. It was a baby leech that stung her feet. It was a euphoric moment for her when she pulled that leech out of her feet. For her, it was a new experience. I climbed up and got her shoes to ensure that she doesn't get leeched again. By this time, I was super confident of walking on the edge again.

After taking few conventional snaps, we started to climb up and back to our tents on the off-roader and Madhumita getting comfortable with the fact that her dismantled organs would automatically get back to its own position. After all she was in the lap of the nature; everything was so natural to happen. Sometimes posting these customary snaps could convincingly prove our popularity in this digital age. Prince had put one such pic from the lion rock point as his FB profile pic and he told me that he had got some 199 odd likes. The next evening when I asked him if it had crossed 200, he said 'oh! It crossed 300 and I think this time I might cross my highest mark of 472 likes'! Wow!! Well, someone who could barely cross 200 likes on FB did not bother to ask him the final numbers J

Now - a serious matter - to decide where to stay on day 3 at Munnar. No, we didn't book our stay from Kolkata. After a lot of deliberation we decided to stay in a tent again but at a different place with another view of the hills. We started our journey towards Kundala dam after crossing Mattupetty dam, Echo point. We decided to stay in tent near Yellapetty. We were excited to trek for an hour (4 kms) to the camp site - that was the route to the tent. Prince parked his car in front of a post office in Yellapetty. Prince asked us to meet at that point at around 8 am the next day so that we could leave for Thekkady and plan our day there properly. But who wanted a proper day when you feel carefree!

We started to trek to the campsite with the caretaker of the property and just in 20 minutes' time when my friend saw a jeep passing by; she gave up on the idea of trekking and desperately wanted a lift. She wasn't ready to trek a path that was accessible by vehicles! That jeep pressed its brakes in 5 meters distance. She got excited only to disappoint herself in the next second when she realised that the jeep had braked to pass a dig on the road for the water to pass. Disappointed but determined that she wouldn't let the next jeep pass without letting her in. To her happiness, she located another jeep approaching her. She told our caretaker guide with a lot of superiority in her voice that she wanted that jeep to give her a lift. But in vain, her happy face became sad when our guide suggested that we couldn't take the jeep because it was plying on another route. Disheartened, she started to walk again. Again to her happiness, she located a truck in 7 minutes and without asking anyone, she made it stop. And yes, this time our guide stopped that vehicle as well. It was going to the campsite. We happily climbed on the truck and held the rod tightly for another roller coaster ride of going up the hill inclined at almost 30 degrees. The pathway was all muddy. Even holding onto that rod strongly was a task. I remembered the equations of slopes and degrees I had studied in school and made a mental calculation that slope was at 30 degrees. For a while looking from bottom of the slope, I wasn't sure if the earth had existed beyond the point where the slope ended on the top! And that we would take a plunge inside the earth beyond that point. Majestic! There was a muddy pathway on the other side of the slope as well. We went face down 40 degrees again and counted that we passed 4 such slopes. The moment we reached there, we realised that none of us liked the view and when we had some issues with the owner of the property, we immediately asked him to send a jeep to take us back to the post office where we wondered if Prince waited for us or left that place to find a suitable spot to spend his night. After passing those twisty roads again that reminded me of my school days, both of us couldn't stop smiling seeing Prince there! Had we been late by 7 minutes, he would have taken a bus to Munnar to visit his cousin. He had his bag packed to leave that place. We reached the post office at 6.23 pm. He waited for us to return as soon as the news got transmitted (via mobile) from the campsite to the post office that we two were returning. We immediately decided to go back to Munnar Pramic. I smiled with my eyes closed as I made a plan on my mind for myself for the next morning. We reached Suryanalli amidst heavy rains at 8 pm. The dinner was already ready for us. The camp fire was ready to set in.